Myxomatosis in rabbits – symptoms, and prevention

Myxomatosis is a disease caused by the virus. It is typical for domestic rabbits and their wild relatives. It is accompanied by the formation of a large amount of purulence, nodules, swelling, and suffocation. It can be treated, but it is considered a dangerous disease that can thin out the livestock and cause significant damage to the farm or population.

Natural focus of disease has always been in Western Europe. In particular, the UK, France, and the Netherlands. To North America myxomatosis was introduced by immigrants. The virus was first detected and confirmed in Uruguay in 1898. In Australia the infection was spread on purpose in order to reduce the impressive population of wild rabbits. Then in 1952-1955 devastating epidemics happened. But recently they have begun to decline since low pathogenic strains have appeared and immunity has formed in animals.

In the first half of the 20th century, Western and Central Europe were considered free from myxomatosis among domestic rabbits. But in the fifties, the artificial focus was created in France, but they lost control of the epidemic, and it spread throughout the country. The disease raged for two years, causing impressive losses among animals.

A little later, the disease entered into Germany, Poland, and Czechoslovakia, but began to fade quickly. Scientists at that time registered a natural attenuation of the virus and its degeneration into weak strains. The epidemic returned only 13 years later. And since 1989, the infection was registered in the USSR. 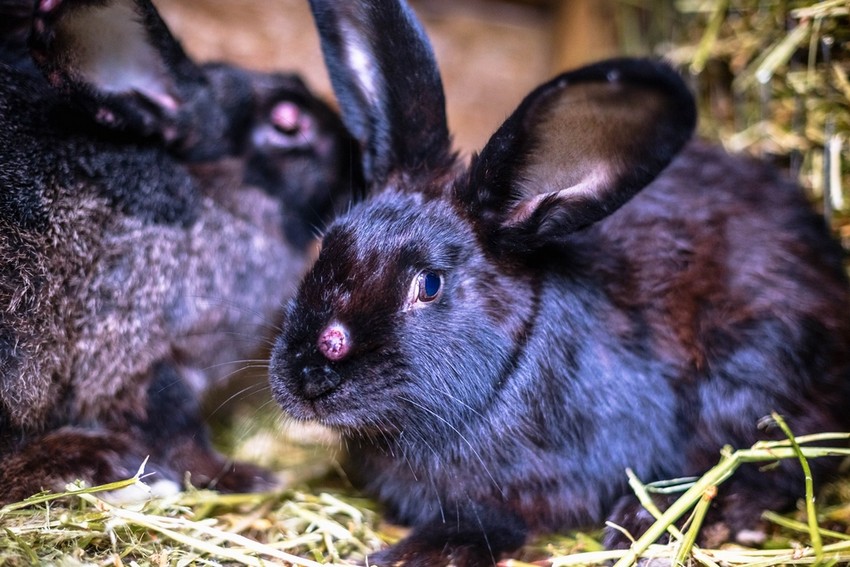 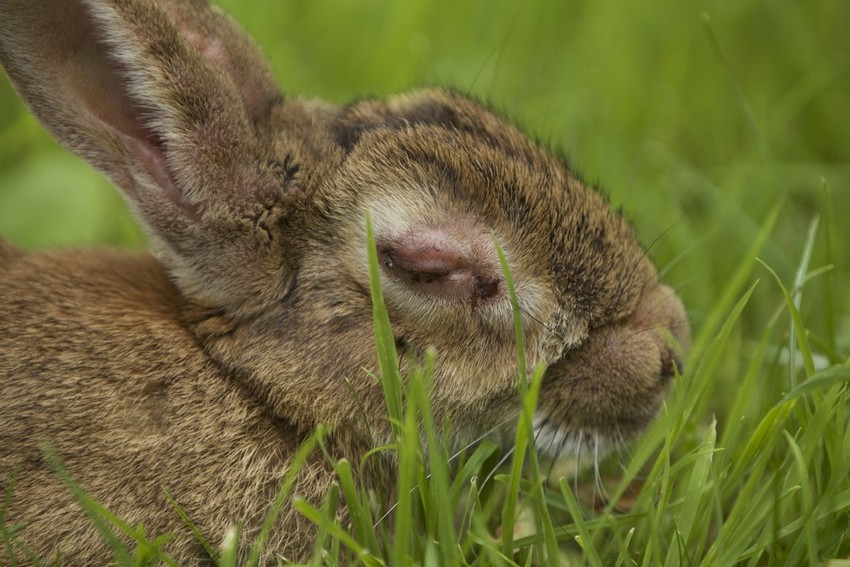 Myxomatosis can have two types:

1) A classic type (oedematous) – starts by conjunctivitis, rhinitis (runny nose), purulence from the eyes and nose, then rapidly growing tumors appear on various parts of the body (the rabbit's face becomes like a lion's), as well as swelling in the genital area and anus. The disease lasts for 4-10 days followed by death (mortality rate is 80-90%). Recovered animals become virus carriers.

2) Nodular type of myxomatosis is following an easy pattern. Nodules ("bumps") are formed on the rabbit's back, auricles, and head which necrotise on the 10-14th day. Mortality rate is 60-70%. Recovered rabbits become virus carriers. Focus of necrosis heal on the 14-25th day.

How is rabbit myxomatosis spread? 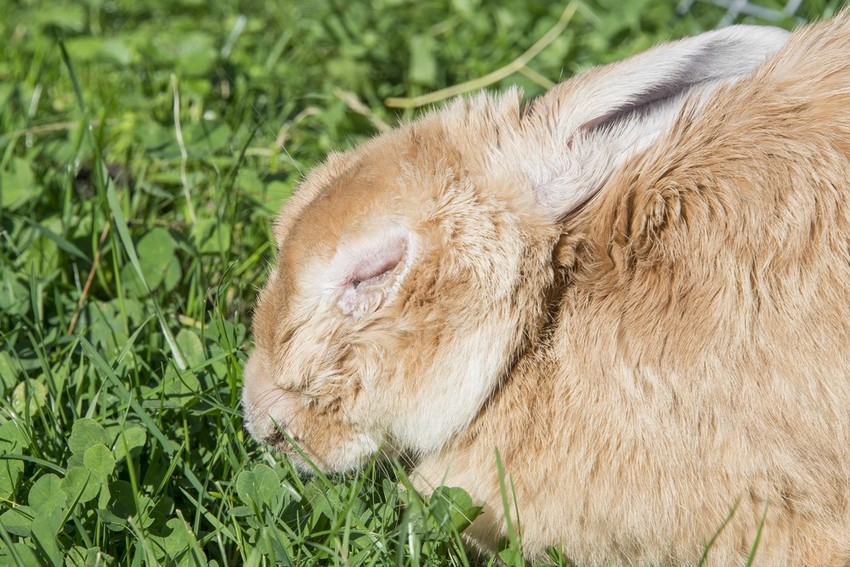 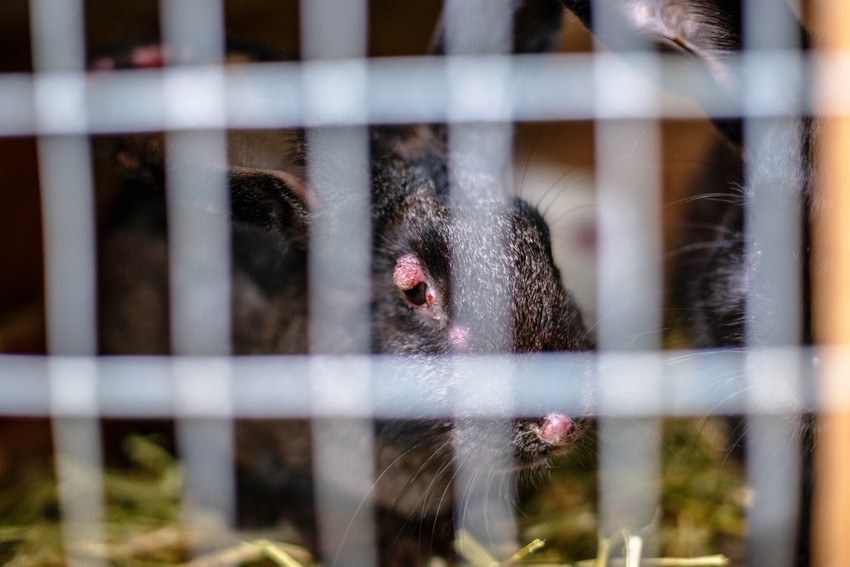 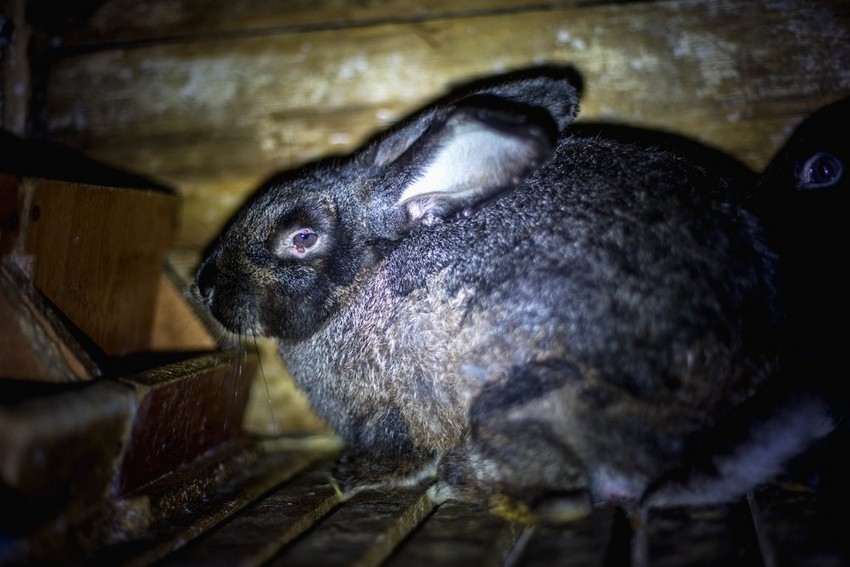 No effective remedy has been found for treating diseased rabbits. The only guaranteed way to keep the number of rabbits is timely vaccination with the Rabbivak B vaccine. Vaccination is subject to clinically healthy animals starting at 30 days of age. Before the use, the vaccine is dissolved in distilled water for injection at the rate of 1 ml per 1 dose of the vaccine. The vaccine is administered once in a volume of 1 ml intramuscularly in the back of the thigh or subcutaneously between the shoulder blades. Immunity is formed within 5-9 days and lasts for 12 months. In promlematic areas, animals should be revaccinated after 3 months.

In order to prevent the disease, regular disinfection of cages, territories and animal skins is required. All infected rabbits should immediately be isolated. And in case of death, the remains are buried or burned, the same is done during slaughter. Freshness of water, feed, and sawdust should be carefully monitored as well as they should get changed often. To remove fleas and lice, try to eliminate flies and other insects in the areas.

Having arisen once, the disease is registered in the same place for several years. The disease has a pronounced seasonal nature (from May to September inclusive).