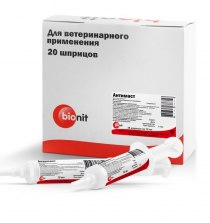 Mastitis in cows can occur during any period of lactation. However, highly productive animals are most susceptible to its occurrence. Clinical forms can be observed in 25% of the herd, and subclinical in 60%. The disease can lead to rather sad consequences, ranging from a decrease in reproductive function and ending with problems with the gastrointestinal tract in calves fed milk from sick individuals.

What are the wrong actions when keeping animals or other factors that can provoke the development of the disease:

Ways to deal with mastitis in cows

The company Bionit offers products for the treatment of mastitis in cows, which have a wide range of antimicrobial effects, allowing you to get rid of the disease when it has already arrived. The general cycle of ways to combat mastitis is as follows:

Among the preventive measures, special attention should be paid to the strict observance of the rules of keeping and breeding animals, a full and balanced diet, the use of immuno-boosting products, and also to take appropriate measures when preparing a cow for milking. Qualitatively reduces the number of mastitis in cows caused by microorganisms, the use of special products for the udder and teats a few days after calving.

Diagnosis of the disease allows the analysis of physico-chemical and biological changes in the composition of milk. A check for the latent course of the disease should be done once a month, as well as when transferred to dead wood or in the postpartum period.

Methods for treating mastitis in cows will depend on its shape in a particular animal. They are:

In any of these cases, during treatment, it is necessary to create favorable conditions for the animal, transfer to diet feeding to reduce the reproduction of milk and to manual milking every 2-3 hours. The udder should be washed with water up to five times a day.

Life does not stand still, and veterinary medicine is moving forward with it. Of course, each doctor has his own way of treating this or that form of mastitis in cows, but the emergence of new modern products cannot be ignored. The Bionit company offers excellent medicines of its own production (vaccines against rabbit disease, ointments for animals, etc.) that can save animals from diseases, and the economy from financial losses. If you are interested in useful information about animals and veterinary products, you can read more in the Publications section.